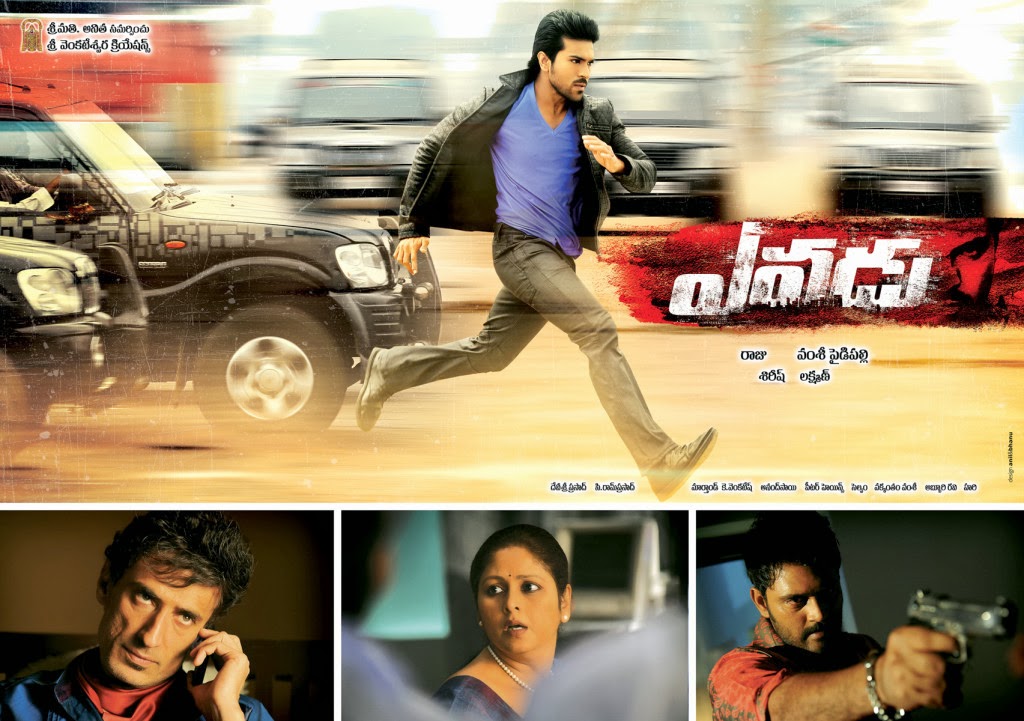 Yevadu Movie Review:
Plus Points:
Ram Charan rocks the show with his intensive performance, breathtaking fights and special dance moments (especially in the Freedom song)
Allu Arjun and Kajal played key cameos in the movie and their presence has taken the movie to the next level. The first ten minutes featuring Allu Arjun and Kajal episodes are breathtaking
The leading lady Shruti Haasan looks very beautiful in songs. Second heroine Amy Jackson is extremely hot in the first-half and provided the required glam quotient
Senor actress Jayasudha played is absolutely perfect in pulling sentimental scenes, she played mother role
The interval bang is very intense and suddenly lifted the momentum to peaks
Sai Kumar does looks menacing as Villain Dharma and delivered a stellar performance, the confrontation scenes between him and Charan are awesome
The action episodes have been shot extremely thrilling, big treat for B and C centers audience, especially the rain fight
The film’s plot is unique and has been executed well. Vamsi Paidipally’s screenplay is exhilarating
Cinematography is finesse, action-choreography is stunning, and dance-choreography is very best
Powerful dialogues were written for Charan and Sai Kumar, treat for fans and masses
Last but not least, Devi Sri Prasad’s music is outstanding. The film’s audio is already super-hit and enthralled music lovers prior to the film’s release. Now, Back Ground Score is enthralling the audience to the core, it is one of the biggest strengths of the movie. Heroism has been elevated to new heights with DSP’s vibrant back ground score. .
Minus Points:
Few episodes in the first-half after first 15 min are slightly on the slower side. The scenes of Ramcharan killing villains in first half were poorly conceived
Shruti Haasan got limited screen presence; she is there only for the songs.
The violent action might not enthrall family crowd. On the other hand, comedy part is not up to the mark. Brahmi and Vennela Kishore are wasted
Second half seems to be inspired from ‘Chatrpathi’, many scenes resembles this Prabhas starrer
Climax becomes cliched and routine
Verdict:
‘Yevadu’ is a decent mass masala entertainer with unique plot. This film will score big in B and C centers in particular for its commercial content.
‘Yevadu’-A massive Pongal treat for Mega fans and masses.
Book your Ticket online and Enjoy this festive season...
Points: 3/5
Download Links: