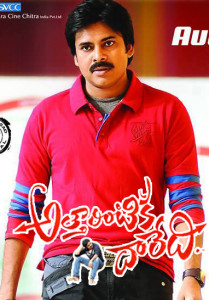 Power Star Pawan Kalyan’s ‘Atharintiki Dharedhi’ has completed its censor formalities on August 2nd 2013 and the movie has obtained a clean ' U ' certificate from the film censor board. The film is getting ready for a huge release on August 7th all over the world.

Pawan Kalyan and Samantha will be seen as the lead pair in this family entertainer (look like) and Trivikram Srinivas is the director of the film. Praneetha will be seen as the second heroine. Devi Sri Prasad scored the music for this movie. Boman Irani, Nadhiya, Brahmanandam and Ali will be seen in key roles.
BVSN Prasad is the producer of this big budget film. AD is coming in with high expectations and the film’s trailer already broke many records on the web.