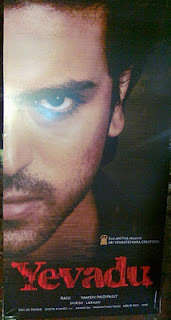 Ram Charan "Yevadu" is getting ready to release this summer, before his Hindi debut film Zanjeer. Zanjeer movie producers are planning for April 12th to release the film. The movie is also releasing in Telugu also.
Yevadu movie producer Dil Raju informed that Yevadu will be release before Zanjeer and he is not confirmed the release date yet. Yevadu is said to be an action thriller and it is being directed by Vamsi Paidipally of “Brundavanam” fame. Devi Sri Prasad is the music director for this flick.
Shruti Haasan and Amy Jackson are playing opposite to Ram Charan in “Yevadu”. Allu Arjun and Kajal Aggarwal are playing the guest roles in the movie.
Tags:   Yevadu Sets   |   Yevadu Leaked Stroy   |    Sruthi Hassan Yevadu
Share this article :
Posted by cinemayam
Labels: Feature, NEWS, Tollywood
« Prev Post Next Post » Home